You‘ve likely heard at least one thing about kombucha. And it probably only led to more questions.

Is it tea or soda? Does it contain alcohol? Can you make it at home? Is it good for you?

We know there are a lot of kombucha questions out there. And today, we’re going to answer them! 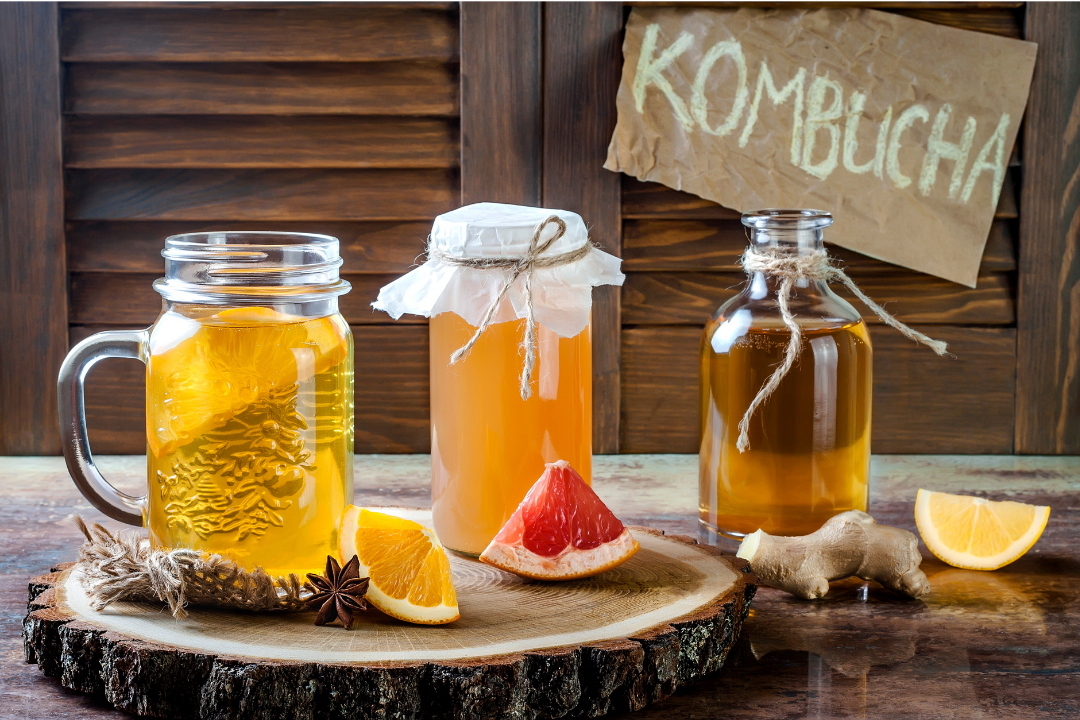 Simply put, kombucha is a fermented drink made with green or black tea, sugar, and bacteria and yeast cultures. Put even more simply — it’s a fermented tea.

The drink is made when yeast and bacteria cultures are mixed with tea and sugar, then fermented. Often, there will be added ingredients for taste and nutrition, such as ginger, mint, berries, or other fruit.

Kombucha is carbonated, so it’s fizzy. It can be slightly tangy and sour, depending on the brew. But in most cases it’s somewhere between a juice and a soda. The taste may be surprising at first, but you’ll quickly realize why so many people are drinking it!

3. Is kombucha good for you? What are the health benefits?

Kombucha is touted as a healthy drink for two main reasons. One, it’s often fermented with green tea — which is considered to be one of the healthiest drinks out there — and two, it contains probiotics.

Green tea contains many bioactive compounds, such as polyphenols, which act as antioxidants in the body. Studies show that green tea can help support a healthy weight, improve cholesterol, and maintain healthy blood sugar levels.

Though there is limited research on kombucha’s effect on the microbiome, it does contain some healthy bacterias that have individually been shown to help boost the health of the gut. And improved gut health has been linked to several health benefits, such as improved mood, cognition, immunity, digestion, skin health, and more.

On top of these two factors, if the kombucha you’re drinking contains other ingredients — like ginger for example — you can get the many health benefits that the root has to offer. 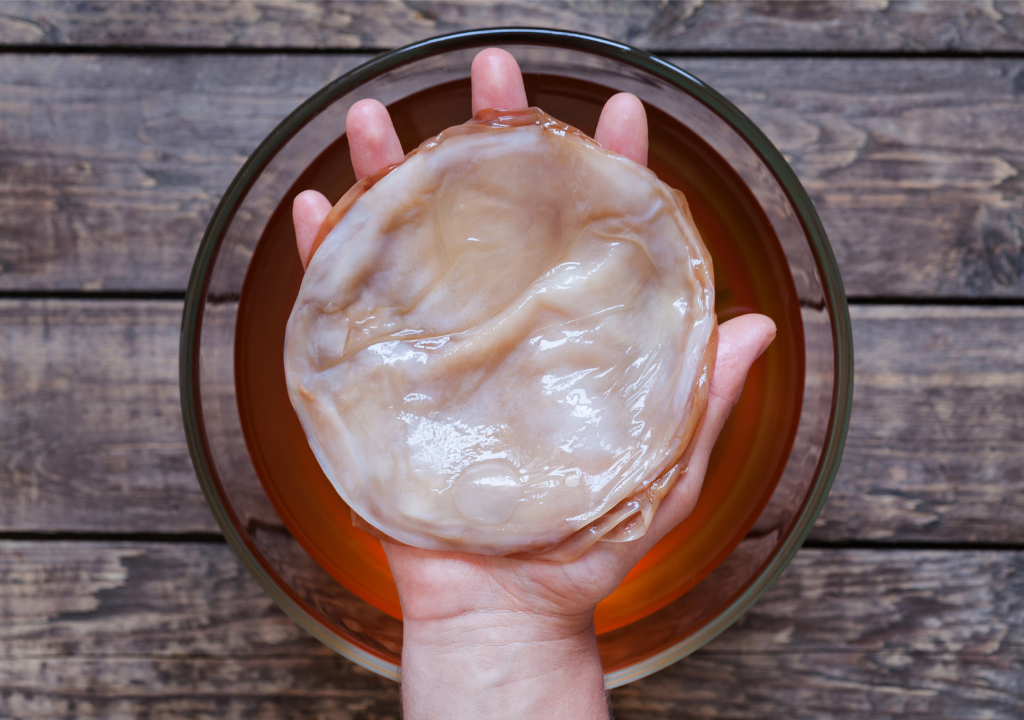 The “mother” or “SCOBY” refers to a leathery, flat, and round blob of bacteria and yeast cultures. “SCOBY” is an acronym that stands for “symbiotic colony of bacteria and yeast”. Due to its appearance, it is sometimes referred to as a mushroom, which is where the confusion of kombucha being a mushroom tea comes from.

Not every SCOBY contains the exact same strain of bacteria, but they all do the same work — breaking down the tea’s sugar during fermentation.

5. Can you make it yourself?

Most tea is pretty easy to make. You simply put the kettle on. But kombucha is a little more difficult.

First, you will need your SCOBY. You can purchase these or make a new one with an already-made batch of kombucha. The process is a bit more complicated, but in short, you put spring water, tea, sugar, distilled white vinegar, and the SCOBY in a jar, cover it with a cloth (secured with a rubber band), and allow it to ferment at room temperature for 7-30 days.

You can find many walkthroughs online on how to make your own kombucha, some varying for taste or other outcomes.

Though you can make kombucha yourself at home, it’s best to get kombucha store-bought, especially if you’re new to the kombucha world. Though rare, fermenting at home can lead to opportunistic bad bacteria from growing in your brew and potentially harming your health. This is more of a concern for vulnerable individuals, such as those who are pregnant or have compromised immune systems. 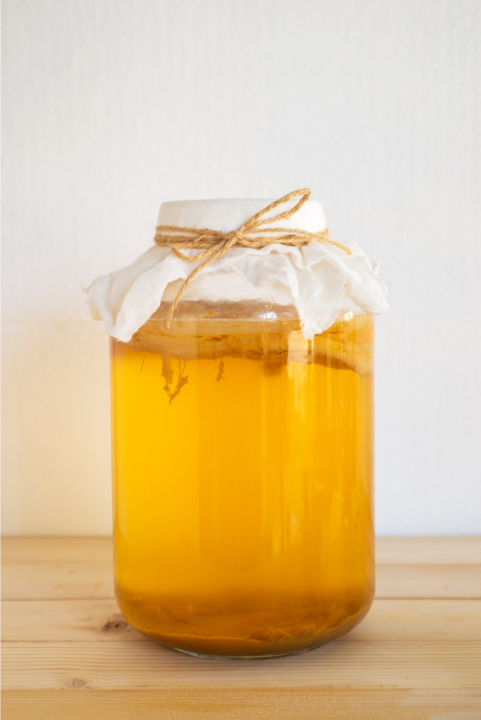 So, while kombucha purchased from the store is generally non-alcoholic, it’s still best to read the labels and double-check! Some contain next to none, where others have 0.5%.

Kombucha contains some sugar, but not much — especially when compared to soda. But this is another good reason to check the label of the kombucha brand you’re considering. Though some may contain low to moderate amounts of sugar, others may have added sugar, leading to high sugar contents.

8. Where can I buy kombucha?

You can get kombucha at most grocery stores these days. If your local grocery store has a “health food” section, you will likely find it there, often refrigerated. Some kombuchas aren’t refrigerated, but to get the most out of the probiotics, it’s best to get a refrigerated brand.

Another question that comes up a lot…

A lot of people tend to wonder why kombucha is so popular. We hope that this blog helped you realize why so many people are choosing to drink kombucha! And if you’re still not quite that sure, there’s only one other thing for you to do… try it out yourself!

Another way to get probiotics

One of the main reasons kombucha is thought to be beneficial for our health is because of the probiotics it can offer.

Good microorganisms can help your microbiome flourish, and when that happens, your body is better off for it. Why? Because research shows that the microbiome plays a role in cognition, immunity, skin health, and so much more!

But it’s important to get the right strain in a formula that your body can absorb.

How does Purality Health’s probiotic do that?